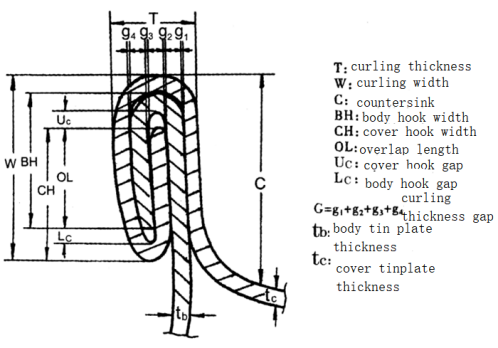 G=g1+g2+g3 +g4 is the sum of the gaps of the iron sheets inside the crimping, which is approximately in the range of 0.10-0.40mm. Generally, G for φ63.5-φ98.9mm diameter tanks is 0.15mm. According to the actual situation, it is generally considered that G=0.15mm for water-soluble sealant and G=0.10mm for solvent-based sealant.

Regardless of the T value standard, the most important thing is that the thickness of the crimping in the same tank should be the same. No matter which type of tank is in the same tank, except for the joints (three-piece tank), the difference between the T values ​​of any two points must not be greater than 0.08 mm.

2. Hemming width W: parallel to the measured size of the body cover hook

The hemming width is the width of the hemming section after the second seal is completed, also known as the hemming length. There are also standards for the crimping width W, which is generally based on the shape of the can lid forming part, the first track, the second roller groove shape and the crimping pressure, the pressure of the supporting chassis, the body hook and the thickness of the can body and lid, and the wear of the roller groove And other major factors.
Reference formula: W=1.1tc+BH+Lc+1.5tc
Where: tc—the thickness of the iron used for the tank cover BH—the length of the body hook Lc—the bottom gap

There is no absolute standard for body hook length BH. Most tank types use 1.9-2.05mm as the standard. As long as the overlap length and overlap rate can meet the safety sealing requirements, it can be accepted. Therefore, BH needs to increase with the tank type, and W increases. Big and increase. Under good rolling conditions, BH and CH are almost equal.

The cover hook gap Uc and the body hook gap Lc are expected to be smaller in general cans. This is because the sealing film located in the crimping part moves to the crimping gap due to the pressure during the crimping process. Therefore, if Uc and Lc are too large, the sealing film will move to the gap and gather, instead of being firm, compressed, and isolated between the plates, resulting in poor sealing effect.

Crimping length refers to the length of the overlapping part of BH and CH inside the crimping
It can be approximated by the following formula:
OL=BH+CH+(1.1)tc-W
The splicing length is one of the criteria for judging the sealing performance of the can crimping. Usually, the splicing length <1.00mm is considered unacceptable (micro-sealing<0.76mm is unacceptable).

The overlap rate OL% indicates the degree of overlap between the BH and CH inside the crimp, that is, the percentage of the actual overlap length (a) to the theoretical overlap length (b). It is the most correct to calculate based on the actual measured values ​​of the two parts a and b, and it can also be calculated approximately with the following formula

9. Tightness TR％
Lid hook wrinkle degree WR% refers to the degree of wrinkles on the inner edge of the lid hook after the crimping is disintegrated. It is visually graded according to the proportion of the wrinkled part to the length of the entire lid hook after the crimping is disintegrated. The number has increased. Tightness TR% and wrinkle WR% are in a corresponding relationship. The smaller the wrinkle, the higher the tightness. The wrinkle adopts ten-level method, and no wrinkle is 0. The tightness TR%=100%, and the wrinkle extends to the full cover. The elder is 10, and the tightness TR%=0%. It is usually judged by combining the flatness of the cover hook section as shown in Figure 4-22. 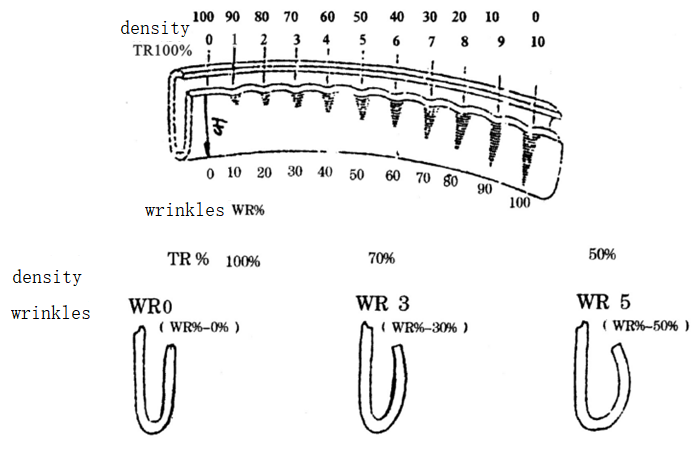 Usually the tightness can be used to judge the sealing degree of the crimping or the adjustment of the sealing machine. When judging, the residual sealant on the lid hook should be removed, and the dent marks left by the removal should be calculated by the degree of wrinkle.
Several expression methods of crimp tightness are shown in Table 4-1.

For the part pressed out due to poor involvement of the cover hook, the cover hook becomes shorter and droops, which is called the inner drooping lip, as shown in Figure 4-23

Figure 4-23 – visual inspection of hook integrity of seam cover
The inner drop lip usually occurs at the joint, because the thick sheet iron at the joint often prevents the curling edge of the can cover from being drawn into the corner radius of the body hook like other parts, resulting in the drop lip. Serious external sagging or too thick welding seam and poor lap joint are enough to cause internal sagging, which will lead to leakage of the tank. After the disassembly of the curling edge, the proportion of the effective cover hook of the inner lip sagging of the cover hook to the width of the whole cover hook is expressed by naked eye or magnifying glass, and each drop is 25%. Due to the reduction of the thickness of the joint, the integrity rate of the joint cover hook is not the main problem Question.
​
11. Indentation
After the edge is disassembled, there is a mark of indenter line (angle change) around the inner edge of the can body (contact part with the cover), which is called pressure mark, and appropriate indentation must be formed. Figure 4-24 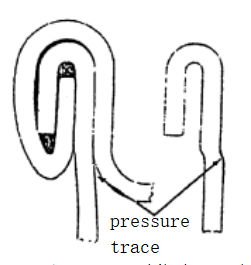 Diagram of Measurement Method for Related Dimensions of Empty Tank

tincanmakingmachine How to Judge the Quality of Cans
Scroll to top